on December 29, 2017
Bitcoin has been making huge moves in the past few days and you might be wondering why.  At one point, bitcoin was making new highs just under $20,000.  In the next few days it was down to around $11,000.  Bitcoin is one of the most volatile investments that many people have in their portfolios and because of that, they are afraid to lose money.  Millions of people jumped on the bitcoin hype train and rode it up to $20,000.  Once it entered that range, there was a huge group of investors that took profit. 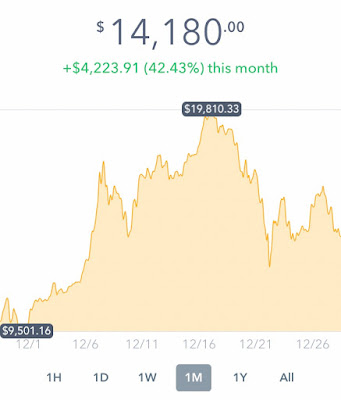 In addition, Bitcoin Cash was also released which confused the average crypto investor.  They had no idea what this new coin was and if they should be buying it instead of bitcoin itself.

After working with and watching many other professional cryptocurrency and bitcoin investors, there strategies all ended up being very similar; buy when everyone else is selling.  This means that when bitcoin is having a down day, that's the time that you want to jump in and scoop up a lot as long as you still believe in the value of the coin yourself .

The reason that bitcoin has been shooting up in the last couple of years is because of the accessibility of bitcoin.  Businesses are beginning to accept bitcoin as payment

Yesterday, December 28, 2017, news broke that the South Korean government is cracking down on bitcoin with proposed legislation seeking to limit how banks interact with bitcoin and other cryptocurrencies.  This will not necessarily take place, but it is the threat of it that scared many crytocurrency investors because South Korea accounts for almost 25% of bitcoin transactions worldwide.

The good news for bitcoin investors and almost all other cryptocurrency investors is that the coins are still trending up.  They have these big sell offs, but then the buyers jump back into the markets and the price of the coin begins to rebound.  If you are afraid of "catching the falling blade" then you probably need to do a little bit more research and cryptocurrencies and investing because that is how the money is made.  Buy low sell high.


Hope this was helpful! 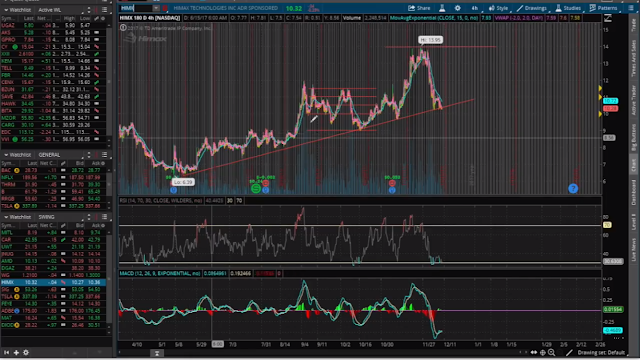 Today, we are going to cover four of the most popular patterns that I like to follow.  There are a large number of patterns out there and it is something that you going to want to become familiar with if you want to be successful in the stock market.  The reason that patterns are important is because they tend to repeat themselves.  Therefor; if you are able to see these patterns forming and you understand what they mean, you will be able to pick great stocks.  Another example of patterns that many people might know is the boom and bust cycle of the real estate market where it ascends, hits its peak, and then trends down, eventually forming a cup and trending upward again. 1.  The ascending up trend  The ascending up trend is when a stock continues to show signs of growth, but as it's growing it hits peaks and has sell offs.  It always bounces at a known, ascending, support level.  The whole point of buying a stock is to make sure that you're getting it for a good dea 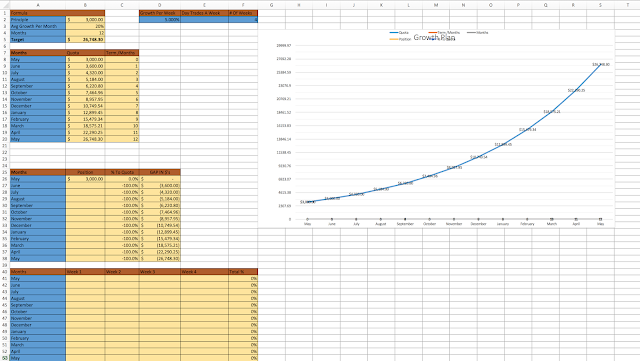 Welcome to the Stock Market Growth Challenge! This challenge is designed for those of you under the PDT rule that have account values around the $1,000-$3,000 range. You can have more or less than that though! We are going to be focusing on quality trades and short term swing trades. Lets jump into it! The stock market growth challenge 2018 Start: $3,000 Target weekly/monthly: 5%/20% Desired Trades: 2 a week Margin  ≥  7% profit No down patterns My starting balance with this challenge will be $3,000. If you have less or more than $3,000 that's fine! I have created an excel file to help you track your progress weekly and monthly and I'll show you how to download that later in the blog post. You can adjust the excel file based on your starting balance. Weekly my target percentage growth is going to be 5% with a monthly goal of 20%. Here's where compounding interest comes in. Say you start with $3,000 and you consistently week after week are making 5%. Week 1: $3

If you’ve been looking for a great app to trade stocks with a more technical side to it, WeBull might be perfect for you. One of the really cool things about WeBull is that once you sign up for an account, they will send you a free stock! You don’t need to link your bank account or load any money into your account. Just sign up and they send you a free stock! When I signed up they sent me $ABEV which is currently a little over $4, but hey I’m not complaining! They offer a similar program to Robinhood in that if you share your signup link with someone and they go through the registration process you will both get a free stock! So go get some friends and start trading together! (Click here to use Ricky's link) Alright so now into the nitty gritty. WeBull is another one of the 100% free trading platform. That means no commission on all your trades! The platform was initially a research platform, but now allows trading. This means that the app as a whole is cente